How to prevent and deal with condensation in double glazing

Discovering that you’ve got condensation in double glazing units or on the panes of your windows is a major irritation.

Unfortunately, when you live in the UK and have a climate with wet winters and high humidity levels it is somewhat inevitable.

As soon as Autumn arrives and temperatures begin to drop, double glazing condensation is one of the most common problems facing homeowners.

Although wiping down windows is inconvenient, if it is not dealt with properly and promptly condensation in double glazing can cause health issues. In extreme cases, black mould can grow and form on both the window frame and cill. The spores of this mould are not good for our health and can lead to breathing issues.

The aim of this article is to address the main causes of condensation and explain the solutions which can help you to prevent it or eradicate it. 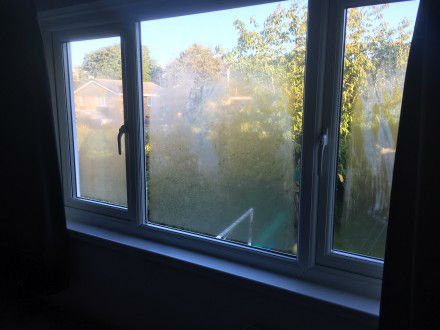 Condensation is the conversion of a vapor or gas into a liquid. It occurs when the temperature of an object (such as a pane of glass) falls below the temperature at which air needs to be cooled to achieve saturation, known as its ‘dew point’.

The ‘dew point’ varies depending on the amount of water (humidity) in the atmosphere. This means condensation can still occur at higher temperatures if there are humid conditions. In cold conditions, condensation will occur even if there is relatively low humidity.

Condensation is more likely to form on the inside of a single glazed window because there is only one pane of glass separating the inside and outside temperatures.

It is still possible to get condensation in double glazing units, but this is more common if they are old and suffering from damaged or perished window seals.

Condensation is bad because it will reduce the lifespan of a window, especially if the sealed unit is allowed to sit in a substantial amount of water for a long period of time. It can also encourage the growth of mould, which can damage the frame.

If your double-glazed windows suffer from condensation, it doesn’t necessarily mean they are faulty. This would depend on where the condensation is on your window.

The main areas where you get condensation in double glazing are:

Condensation on the inside pane of your window

Cause: In most cases, internal condensation issues occur because of too much humidity in the room or little to no air circulation. Low internal room temperatures can also create cold surfaces (particularly on windows) which allows warm air to condense onto them easily.

In kitchens and bathrooms, where there is a lot of moisture and humidity, condensation is also inevitable on colder surfaces.

If your property has undergone major construction work, high levels of moisture should be expected due to wet plaster, drying concrete, paint etc. In extreme cases, this can take between six months and a year to fully dry out.

If your home is suffering from condensation, use a cloth or towel to wipe it off as soon as possible because allowing it to sit on surfaces will eventually cause rot, damage and mould.

Solution: The best way to deal with condensation on the inside pane of a window is to improve the circulation of air, which will reduce humidity and help to clear moisture in the room.

Keeping your property at a constant (and reasonably warm) temperature will reduce the number of cold surfaces and make it harder for condensation to form.

Use an extractor fan or open the bathroom window when getting a shower or bath to remove moisture-rich air and prevent water vapour from circulating. If possible, it is also a good idea to keep the bathroom door closed.

When cooking, try to cover any pots or pans with a lid to reduce water vapour. Opening a window or using an extractor fan will again remove moist air.

If you use a tumble dryer, make sure the vent pipe is placed out of a window. When possible, avoid drying wet washing inside as this is a common cause of increased humidity.

Using a dehumidifier will help to alleviate higher moisture levels, but they are not cheap to run and cost around 50p a day to operate. Running it on the lowest or ‘economy’ setting will reduce these running costs. You can then turn it up when cooking, showering or drying damp washing indoors.

Condensation on the outside window pane

Cause: Whilst this does not happen often, condensation can form on the outside pane of a double-glazed window (see image above). When it does, it is usually because the unit is performing well and very thermally efficient. It is not an indication that there is anything wrong.

The reason it happens is because the external air is warmer than the temperature of the glazed pane’s surface – and the dew point of the air is higher. It is more likely to occur at night or early in the morning when temperatures are low, particularly if there is a clear sky and almost no wind.

Solution: Although it can be a pain to have limited visibility until the condensation on the outside pane clears, it’s a good sign that your windows are extremely energy efficient and constructed using low-emissive glass.

If you do want to eradicate the issue, there are a few simple steps you can take.

The first is to allow more air and wind to flow past your windows, as this will reduce the chances of this condensation forming.

To prevent the window’s surface area from cooling to the point where condensation forms, you could consider creating more areas of shading as this can help to retain warmth. Positioning tall trees, shrubs, plants or some form of shelter may help you do this.

Condensation in the ‘air gap’ between the two glass panes

Cause: There are quite a few potential reasons why you may see condensation in double glazing units. As is the case with most things, double-glazed windows will deteriorate over time. How quickly this happens depends on their build quality. Eventually, the seal around the two panes which creates the ‘sealed unit’ will start to degrade and crack. This allows moist air (condensation) to get into the ‘air gap’ between the two panes of glass.

On older or poorer quality units, the sealant used to create the seal (which is sometimes just a strip of rubber) may be of a low grade or become loose over time. If the seal and bead that’s supposed to hold the glass in the frame deteriorates, moisture and water can get into the frame.

Allowing large amounts of water to settle in the frame like this for a long period of time will eventually affect the ‘air gap’ seal surrounding the two panes of glass. Sometimes, the uPVC frames themselves will crack and allow water to gather.

Another reason why you may see condensation in double glazing is because of a fault with the ‘spacer’ bar. Most double-glazed windows now feature a ‘spacer’ in between the two panes of glass and this is full of desiccant, a highly-absorptive material which sucks up any moisture in the ‘air gap’ void.

If there is even the slightest imperfection in the seal, this desiccant can quickly become saturated by any moist air or water which enters. When it cannot retain any more, the moisture then begins to appear as condensation.

In reality, the issue could have been there for quite some time but has only become apparent because the desiccant is no longer doing its job.

Solution: The appearance of condensation in double glazing is both annoying and undesirable. Unfortunately, it also means that heat (which you’re probably paying for) is escaping from your home.

If you are experiencing condensation, moisture or large amounts of water between the two panes of glass it is likely the seal has completely failed. The likelihood is that the units have deteriorated past the point where they are no longer doing their job properly.

In terms of fixing this issue, the cause will determine the solution – and the expense involved – but the two main fixes are...

If the uPVC units are in good condition, you may just be able to replace the sealed units. There are now a number of specialist companies which can repair or recondition each faulty unit.

In most cases, the process involves drilling a hole into the ‘spacer’ bar or glass pane unit. A special drying agent or desiccant is then pumped or injected in to dry out the air or expel the condensation within the unit. An anti-fogging agent is sometimes used to prevent the build-up of any further moisture before the unit is completely sealed again.

If you are considering a repair as opposed to a replacement, it is important to remember that the seal’s failure is the most likely cause of the issue. Resealing will solve the problem, but may not actually address the core issue. Before undertaking a repair, think about whether the benefits and their expected life cycle will fully justify the expense involved.

Or should you replace?

Whilst this is obviously the most expensive route to take, it is the best solution (if you can afford it) and it may provide better value for money in the long term.

If you are experiencing condensation in double glazing that you have had for less than 10 years, check to see if your windows are under guarantee.

Should you be lucky enough to have one, get in touch with the company who installed the windows and report the problem. If the seal or unit is found to be defective, they should replace it for free. Do not be tempted to tamper with the units or attempt a repair yourself because this will invalidate your guarantee.

Most reputable windows companies now manufacture new units to very high standards and newly-installed windows will have at least a ten-year life span (sometimes 15 or 20 years).

Fitting A-rated windows is now standard practice at EYG because we know they help to reduce the likelihood of condensation by reducing heat loss from your home. They also lock in heat which is captured from the sun, reducing the amount of money you spend on energy bills.

We know that investing in double glazing is a big decision and that’s why we offer a 'repair and replace' warranty on all installations. In the unlikely event that you should get condensation between the two panes of your double glazing, we would replace them free of charge.

To find out more about our expertise or get a FREE quote, please enter your details or call 0800 181888 today.